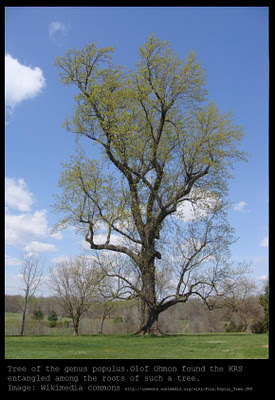 About a month ago, I wrote a post about the Kensington Runestone, and a recent allegation that the runic inscription found on that Minnesota stone contains a cipher which conceals a hidden message from Olof Ohman indicating that he in fact carved the stone.

The previous post discussed some apparent problems with the decipherment, which appear to call into question the assertions that this new alleged hidden message in the text proves beyond a doubt that Olof Ohman, who found the stone while clearing his farmland in Minnesota in 1898, was playing a practical joke on the world when he inscribed it with runes.

In addition to pointing out some problems with the cipher, that post also pointed to work by anthropological linguist Dr. John Bengtson, who argues that some of the alleged errors in the inscription itself, which scholars have used to allege that the text is nothing but a clumsy forgery, have over time been revealed to be similar to runic inscriptions from Europe that are believed to be authentic. He also points to other linguistic and historic reasons which support the possibility that the stone's inscription may in fact be from 14th-century Scandinavian voyagers.

Dr. Bengtson has pointed out an additional problem with the recent theory about the runestone containing a cryptogram: the supposed hidden message points to the farmer who discovered the stone as the forger. This is actually a very significant point. It has always been problematic to argue that Ohman, a working farmer who with his wife raised nine children while working the difficult soil of Minnesota in the late 1800s, had the time or inclination to forge a runic inscription in a 200-pound rock. Now the runestone's doubters are alleging that he was also able to work a hidden cryptogram into the runic text as well.

Dr. Bengtson argues that if the stone really is a forgery, it would be farfetched to believe that Ohman was the forger. Such a project would have taken a lot of free time and a lot of research and a lot of knowledge that Ohman simply did not have the background to acquire.

This biography of Olof Ohman shows some details which support Dr. Bengtson's argument: Ohman was born in Sweden in 1854 and his father worked a carpentry workshop and kept a couple of cows but did not own any land. Olof's mother died when he was 17, and many of the responsibilities of raising his younger siblings fell to him. In addition, he worked with his father in the carpentry shop and no doubt would have had responsibilities involving the cows as well. By 22 he was working as a hired hand on neighboring farms.

At the age of 24, he boarded a ship bound for America, with a dream of owning his own land. He took a train to Minnesota (where many Scandinavian immigrants gravitated) and worked as a carpenter and in a steam-powered lumber mill and a flour mill. He married a girl who was a Swedish immigrant herself and the daughter of Swedish farmers. They purchased a farm in 1890, at which time they already had two young children with seven more to follow over the years. The family lived in a dugout home on the homestead for at least one year before they could erect a more comfortable structure.

There is little to indicate spare time of the magnitude required to acquire the kind of knowledge necessary create the text of the Kensington Runestone, let alone a hidden message identifying himself as the forger of such a text. The indications from the biography are of a hard-working man who had a dream of someday owning his own farm, and put in a considerable amount of effort and took a considerable amount of risk to achieve that dream.

Some might argue that some other unknown forger created the text, and then created a cryptogram which identified Ohman as the forger, but that does not really make much sense. Further, as noted in the previous post on the subject, there appear to be some problems with the supposed hidden message in the first place (some of the alleged word counts which are supposedly derived from the numbers in the runic inscription do not actually seem to point to words which will create an intelligible message at all).

Also, Dr. Bengtson points out that Ohman found the stone tangled in the roots of a large poplar tree -- he had devised a method of felling trees on the land to clear it which involved digging around the base, cutting through the roots, and then using a winch to topple the tree, according to an article on this website describing the discovery of the stone (and which includes a sketch Ohman made of the tree and the stone's location -- to reach the page in question, follow the link and then click the word "Runestone" in the left-hand menu column). This fact indicates that the stone had been buried for at least many decades. Dr. Bengtson's essay on the subject points to a 2005 study by geologist Scott Wolter which argues that the weathering on the stone indicates that the inscription is at least 200 years old (of course, as a supporter of the authenticity of the Kensington stone, some will argue that Wolter's findings are biased).

While there may be reasons to doubt the authenticity of the Kensington Runestone, it seems that the supposed hidden message identifying it as a prank by Ohman is probably not one of them. Dr. Bengtson makes an excellent point when he says that hoax theories which allege Ohman as the forger are probably on shaky ground.

It seems fair to ask if those who oppose the authenticity of the Kensington Runestone do so because they are skeptical of any European contact with the Americas prior to Columbus. If so, they should known that the Kensington Runestone is not alone, but that there are literally thousands of other pieces of evidence which indicate deliberate and ongoing contact across the oceans long before AD 1492. A list of many others can be found here.

Thanks to Dr. John Bengtson for pointing out the biggest problem in this latest attempt to discredit one of these pieces of evidence.