Earlier today (at 0908 UTC on March 14), a powerful 6.8 earthquake shook Japan, just three days after the one-year anniversary of the catastrophic earthquake of March 11 last year.

Earlier this year -- on the first of January in fact -- Japan experienced another powerful earthquake, measuring 7.0. These earthquakes -- especially these recent quakes so close to the anniversary of the 2011 tragedy -- have many people around the world wondering what's going on? 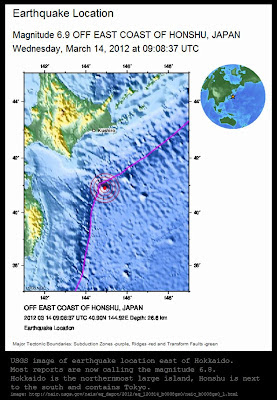 The hydroplate theory of Dr. Walt Brown explains hundreds of pieces of geological evidence from around the world better than competing explanations explain them. Because of this fact, Dr. Brown's explanation for the cause of earthquakes should be carefully studied and understood. The best way to do that is to visit his chapter on "The Origins of Ocean Trenches, Earthquakes, and the Ring of Fire," available in its entirety online.

In order to understand the origins of earthquakes according to the hydroplate theory, one must realize that all earthquakes can in a very real sense be considered "aftershocks" of a catastrophic event caused by the physics surrounding a worldwide flood.

During that event, the high-velocity escape of massive amounts of water from deep under the earth's crust eroded tons of sediments as it flooded the earth. During the period that the floodwaters covered the earth, these sediments were sorted into the strata that are found around the world today. The removal of this weight along the line of the rupture where the water escaped, however, started in motion a chain of events that literally continues to this day.

It did not happen immediately, but the basement rock beneath the rupture eventually began to arch upwards, and as it did so, the immense frictional forces involved melted rock deep below it, according to the hydroplate theory. Great quantities of rock were melted. Simultaneously, the plates that hold today's continents (bounded by the sheer edges that mark the rift caused by the escaping water, which are today's continental shelves) began to slide away from this upward bulging line, which began in the Atlantic along the geological feature that remains today as the Mid-Atlantic Ridge. The removal of this additional weight as the continents began to slide away from the bulge (still lubricated below by some of the subterranean water, hence the term "hydroplates") caused the bulge to spring up even further, accompanied by even more frictional melting and heat.

This upward bulge, of course, did not open up a big "air pocket" in the center of the earth -- instead, the mass below rushed upwards to compensate, with the effect that on the opposite side of the globe, the rock was "sucked downwards" towards the Atlantic, accompanied by massive melting and heat there as well. As rock melted below the surface that would become the floor of the Pacific ocean, the entire area was pulled by gravity towards the earth's center (and towards the Atlantic on the opposite side of the globe).

During the flood phase, frictional heating in the inner earth began melting and contracting solid rock, as explained in “Magma Production and Movement” on page 151. Because of this contraction, the crust on the Pacific side of the earth (hereafter called the Pacific plate ) fractured at many places within the boundaries of the ring of fire and settled (downward, toward the Atlantic) by at least 10 miles!13 That drop steepened the downhill slope of the sliding hydroplates and allowed them to slide into the Pacific region without major obstructions. Downward buckling and deep faulting formed trenches. Soon, huge volumes of magma began erupting onto the days-old Pacific floor. During the next few years, frictional heating melted much of the inner earth. All this melting lubricated the shifts inside the earth and allowed gravitational settling, which released much more heat, increased earth’s spin rate, and converted the inner earth to today’s inner and outer core—monumental changes. The thick layer of magma that spilled onto the top of the sunken Pacific plate provided most of the heat that drove the ice age and accounts for almost 40,000 volcanoes. Even today, magma breaks out and escapes upward, heating part of the ocean and creating “El Niño” weather conditions.

The creation of an enormous basin on the other side of the earth from the upward bulge of the Mid-Atlantic Ridge only served to increase the slide of the continents towards it and away from the Mid-Atlantic Ridge on both sides. The edges of this violently collapsed section of the globe would become the well-known "Ring of Fire" along which about 90% of today's earthquakes still take place.

The enormous production of magma that took place during these events -- from the movement of so much rock deep within the earth, as well as from the sliding of these plates -- is extremely important for the explanation of earthquakes to this day. As Dr. Brown explains, when rock melts to magma, it occupies more volume than the original rock when it is at the earth's surface (in the form of lava, for example) and at depths of up to about 220 miles beneath the surface. Below that depth, however, melted rock in the form of magma actually occupies less volume than the original rock. At depths of around 220 miles, the magma occupies about the same volume as the original rock.

This fact helps explains the cause of earthquakes, as well as the depths at which earthquakes originate. Magma formed at depths less than about 220 miles tends to migrate towards the surface (which explains all the volcanoes around the ring of fire, as well as all the volcanic flows on the floor of the Pacific and in the Pacific Northwest, and the numerous volcanic archipelagos and seamounts found in the middle of the Pacific Ocean). Magma below that depth tends to seep downwards, towards the earth's core, and is responsible for the formation of earth's liquid outer core.

Magma formed at depths of about 220 miles, where it occupies about the same volume as the original rock, does not have as strong a tendency to migrate. The migration of magma is what creates violent shifts inside the earth, which are felt as earthquakes.

Dr. Brown explains that the many faults that were created by the violent forces described above (as well as by the forces generated when the sliding hydroplates finally ground to a halt) continue to experience heating and melting today. He explains how this can cause a shallow earthquake (at depths less than 220 miles):

As discussed on page 151, frictional heating along the fault melts the grain-sized minerals with the lowest melting temperatures, causing them to expand, because they were above the crossover depth. (Remember: Tiny movements at the extreme pressures deep in the earth create great heat and melting.) Minerals with higher melting temperatures remained solid, maybe for decades, thereby encasing and trapping the tiny droplets of melted rock.

As more frictional heat “soaked” very slowly into the rock on both sides of the fault, the previously encased droplets of melt began to leak. Paths opened up for the expanding melt to escape upward buoyantly, allowing the highly compressed solid “scaffolding” (surrounding the focus and composed of the minerals with the highest melting temperatures) to become unstable and begin to collapse. Frictional heating instantly became extreme, so all nearby minerals suddenly melted. The result: a powerful earthquake.

The terrible earthquake that struck Japan on March 11, 2011 was measured to have its origin at a point twenty miles below the ocean floor, thus qualifying as a shallow earthquake and demonstrating that a "shallow" earthquake can be incredibly powerful.

Similarly, the earthquakes that took place today appear to have been shallow earthquakes. Here is a USGS report for the 6.8 quake (listed here as a 6.9 in the initial report), showing the depth of the epicenter to have been 16.5 miles.

The trigger for a deep earthquake is similar, but the magma displaces downwards towards earth's core instead of upwards, as Dr. Brown goes on to explain:

This scientific data strongly argues that the hydroplate explanation for the cause of earthquakes is correct. It is difficult to see how the tectonic theory -- which argues that earthquakes are caused by the ongoing drifting of plates atop a generally liquid mantle -- can explain this bimodal distribution data.

Finally, and rather ominously, Dr. Brown makes the statement that, "Drainage into the outer core continues today, releases gigantic amounts of heat throughout the mantle and core,28 and will eventually produce many powerful earthquakes. When this will happen is uncertain.29 "

In other words, the heat released by previous earthquakes can begin the process of "heat sink" described in the passage quoted above (on shallow earthquakes, although applicable equally well to deep earthquakes). This could theoretically mean that over time, powerful earthquakes could generate a "chain reaction" effect, initiating the process of triggering more earthquakes, which in turn lend their heat to new buildups that will develop into earthquakes themselves.

Perhaps this has already been going on for thousands of years, and we don't have to be concerned that it is getting worse. Let's hope that this is the case. 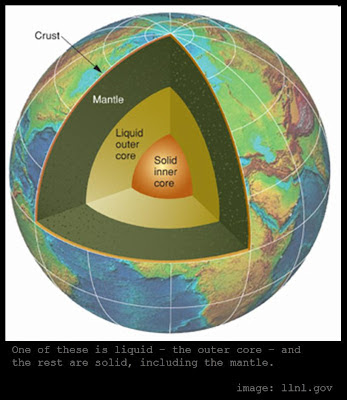