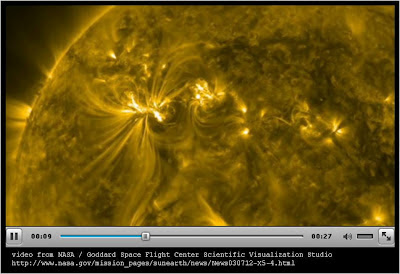 Here is a link to a NASA page containing a video showing incredible imagery from the recent solar flare, which erupted when the earth was positioned at the 06 March to 07 March point in its orbit and turned such that it was about 1900 Eastern Standard Time on 06 March (which corresponds to about 0000 on 07 March for Greenwich or Universal Time).

This flare was categorized as an X5.4, making it the second largest flare -- after an X6.9 on August 9, 2011 -- since the sun’s activity segued into a period of relatively low activity called solar minimum in early 2007. The current increase in the number of X-class flares is part of the sun’s normal 11-year solar cycle, during which activity on the sun ramps up to solar maximum, which is expected to peak in late 2013.

The NASA page goes on to say that shortly afterward, "at 8:14 PM ET, March 6, the same region let loose an X1.3 class flare. An X1 is 5 times smaller than an X5 flare." This Wikipedia page explains that the scale used measures flares in terms of Watts per square meter at peak flux as measured by the Geostationary Operational Environmental Satellite, using letters A, B, C, M and X to indicate increasing ranges of intensity, with X indicating the highest.

The most amazing part of the video linked above is the visible shock wave that can be seen rippling across the surface of the sun. NASA tells us that these so-called "EIT waves" move at over a million miles per hour and can travel the entire breadth of the sun.

As most people have now heard on the news, these relatively intense solar flares triggered two corresponding coronal mass ejection (CMEs), which are now speeding towards the earth (and towards Mars, which is currently quite close to us in its orbit, as discussed in this blog post and in the blog posts describing the apparent retrograde motion that observers on earth perceive when earth passes by Mars on our inside track around the sun).

A coronal mass ejection consists of solar material streaming through the interplanetary medium (space), a form of plasma energy containing solar energy particles including protons, electrons, and ionized gases. When it impacts the earth's magnetosphere, these plasma streams will create magnetic storms with a variety of consequences on the electromagnetic spectrum on earth, including the possibility for visible aurora in the night sky.

The NASA site tells us that the CMEs are heading towards us at more than 600 miles per second, and this Wall Street Journal article explains that they should begin to arrive between 0100 and 0500 on Thursday 08 March (Eastern Standard Time, or between 0600 and 1100 Universal Time the same day). For observers on the west coast of North America, that means between 2200 this evening (07 March) and 0200 early Thursday morning (08 March) -- in other words, just a few hours from now!

As discussed in previous posts, while outer space was once thought to be empty (just a lot of "space"), it is now believed that it is actually full of powerful plasma flows. This page from hydroplate theory originator Dr. Walt Brown discusses the importance of plasma and notes that at least 99.9% of the matter in the visible universe is plasma. Previous posts discussing this important subject include "Across the (Electric) Universe" and "The important questions surrounding earth's radioactive isotopes."

Here is a link to a website dedicated to exploring some of the implications of "plasma cosmology" and the "plasma universe." Note that this website is also associated with the work of theorists such as David Talbott, who believe that Saturn, Mars and Venus once lined up much closer to earth than they are today, creating a dazzling (and plasma-charged) spectacle for observers on earth, which gave rise to most ancient mythology.

I have touched on this theory in the posts linked above, as well as in this post and in many of the message board conversations from my month as Graham Hancock's "Author of the Month" for January 2012 (convenient links to those conversations are provided here).

As I have briefly explained, while I believe that plasma science is extremely important and that there are many clues there which will certainly shed light on crucial questions about the geology of the earth and about ancient mythology, I do not agree with the planetary assertions of Mr. Talbott and his colleagues -- I believe that most of the ancient mythology they are discussing is much more coherently understood based upon the thesis proposed by Giorgio de Santillana and Hertha von Dechend in Hamlet's Mill (discussed extensively in previous posts, and also in my book itself). If those planets filled the sky in ancient times (a proposition which would be very difficult to explain under currently-understood laws of physics anyway) they would have drowned out the stars that mankind clearly observed with a high degree of accuracy at a very early period.

Nevertheless, while I think the speculations about an arrangement of an awe-inspiring alignment of Saturn, Venus and Mars are incorrect, I do acknowledge that plasma is extremely important -- in fact, the hydroplate theory shows that plasma discharge did play an important role in the events surrounding the flood, and thus it is quite possible that some of the other assertions about the connections between plasma science and ancient art (and some ancient legend) could be on the right track.

Some of my blog posts linked above discuss the ways that Dr. Walt Brown has shown that plasma phenomena on earth are connected to the events surrounding the global flood. He also shows that today's earthquakes are directly connected to the events surrounding that flood, and points to evidence of electric discharge prior to violent earthquakes to this day (some of that evidence is also discussed in this previous blog post).

Finally, the magnetosphere that protects us on earth from the most damaging effects posed by such solar ejections is also an important clue which appears to support Dr. Brown's theory. See for example the discussion entitled "The Origins of Earth's Powerful Magnetic Field" which is located about seven-eighths of the way down this page in the online version of his book which he makes available to all for their examination and consideration. For more on that subject, see also this previous post and this previous post on this blog.

The excitement surrounding the impending arrival of these solar disturbances can be the occasion to explore these fascinating and important topics. It can also be an occasion to get out and see if there are any beautiful auroral phenomena created in your part of the globe by these recent solar flares.
Posted by David Warner Mathisen at 5:54 PM