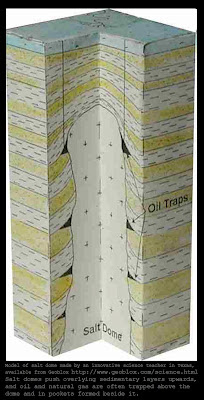 Salt domes are enormous geological structures in which great plumes of salt have penetrated upwards through overlying layers of stratigraphy, sometimes for many thousands of feet.

They displace the layers of strata and create pockets alongside and above the salt plume which often contain oil and natural gas: thus, salt domes are very well known in the oil and gas industry and have great value when they are located. Here is a link to a diagram of a salt dome at Fausse Point, Louisiana where a petroleum exploration and production company (Golden Gate Petroleum from Australia) has identified an extensive "play" in the displaced strata adjacent to a large salt dome. Here is a link to a diagram on the webpage of King Saud University illustrating salt domes and their importance in oil and gas exploration.

In addition to being important for onshore oil and gas exploration, salt domes are found in great abundance in the Gulf of Mexico and in the Mediterranean, where the layers that they are pushing through are now underneath seawater. Many offshore oil plays in the gulf are found next to salt domes.

How can we explain the origin of salt domes? Conventional geology argues that ancient seas must have evaporated (in some cases, evaporating and re-filling many times) in order to produce massive salt deposits. Later, over millions of additional years, layers of strata were laid down over the salt layers. Sometimes, the trapped salt pushed its way up through the strata to create salt domes.

There are some problems with this explanation, the chief among them being the amount of ancient evaporation and refilling that would be required to create the "mother layer" far below the enormous plumes. As Dr. Walt Brown, originator of the hydroplate theory points out, the "mother salt layer" beneath the Gulf of Mexico is about 100,000 square miles in area and 1,000 feet thick, and is located at depths of 20,000 feet.

To produce that much salt, a hypothetical ancient sea must have evaporated and re-filled dozens of times, as would the hypothetical ancient sea proposed to explain the mother salt layer found beneath the Mediterranean (which also exhibits salt domes). Dr. Brown asks of such explanations, even if we grant this speculative multiple evaporation of an ancient sea, "why didn’t each refilling of the Mediterranean basin redissolve the salt residue left from prior evaporations, allowing currents to remove the basin’s salt?" (see this page in his online book where Dr. Brown discusses salt domes about halfway down the page).

He also points out on this page that salt domes and their deep mother salt layers do not contain organic remains, which is another powerful argument against the conventional explanation (see point number eight).

The hydroplate theory, however, has a very straightforward explanation for these geological features. Prior to the catastrophic flood, salt water trapped beneath the earth's crust was under tremendous pressure, and became super-critical. Super-critical water can hold much greater amounts of dissolved chemicals, including salt, than water under normal conditions. However, at a certain temperature point, this salt will precipitate out.

On this page of his online book (see the section entitled "Flood Phase"), Dr. Brown explains how the earth's vast salt layers were formed during events surrounding the global flood:

As explained on page 120, salt had precipitated out of the supercritical subterranean water before the flood began, covering the chamber floor with solid, but mushy, salt. Escaping water swept much of it out of the chambers. When sediments falling through the flood waters blanketed the pasty, relatively low-density salt, an unstable arrangement arose, much like having a layer of light oil beneath a denser layer of water. A slight jiggle will cause the lighter layer below to flow up as a plume through the denser layer above. In the case of salt, that plume is called a salt dome. Deep salt layers—some 20,000 feet below sea level23—are resting on what was the much deeper chamber floor. Wherever the chamber roof was removed, the floor below rose. Two such places are now the Gulf of Mexico and the Mediterranean Sea.

We have previously seen evidence that the strata found around the world were laid down rapidly during the flood, rather than over the course of millions of years as proposed by conventional uniformitarian geology.

Thus, salt domes join a long list of evidence which is difficult if not impossible to explain under the conventional geological paradigm, but which is satisfactorily explained by the hydroplate theory. Other examples are linked in this previous post, although there are dozens more discussed in other previous posts and literally hundreds of others examined in Dr. Brown's books.

A proper understanding of earth's geology is not only important for finding hydrocarbons (in fact, it is quite possible to find hydrocarbons while operating under flawed geological theories -- salt domes were known to be important for locating oil as far back as the 1800s, prior to the advent of Wegener's theory of continental drift). It is also extremely important for the proper understanding of earthquakes (and the possibility of providing better early warning than we have today).

Also, Dr. Brown's theory of a catastrophic flood throws light on many mysteries of mankind's ancient past, as discussed in the Mathisen Corollary book (and elsewhere on this blog). It is truly worthy of greater consideration.

Posted by David Warner Mathisen at 12:31 AM