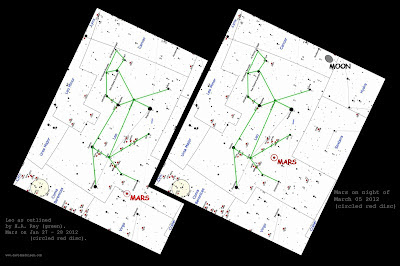 Mars made its closest pass by the earth today at about 12 noon Eastern (US) time, which was about 9am this morning for those of us on the west coast of North America.

Thus, observers on the side of the earth that was turned towards the sun (most of the western hemisphere) at that time would not be able to observe Mars at the moment of closest approach.

However, readers who have been following the posts in this blog about Mars and its retrograde motion (still underway) should have no problem locating the brilliant Red Planet in the constellation Leo. Previous posts on the subject have included "Mars retrograde motion for 2012" on January 27 and "Have you been watching retrograde Mars?" on February 15.

The moon is currently very close to the stars of Leo, and waxing towards a full moon on March 8, so it tends to drown out the constellation somewhat, but if you've been watching Mars over the past few nights (and as you can even see tonight, despite the moon's increasing glow), Mars has now moved dramatically retrograde in the direction of Regulus, as seen in the diagrams above.

Mars is always near its closest approach to earth when it is at "opposition" to earth from the sun, as this article from EarthSky explains (because opposition occurs when earth is between Mars and the sun, or when Mars is "opposite" to the sun from the earth, as happens once in a period of just over two earth years). However, due to the complexities caused by the fact that the planets orbit the sun on elliptical paths (with the ellipse of Mars being much more "eccentric" than that of earth), Mars actually reached true opposition on March 3rd and its closest point to earth (for its current lap around the sun) on March 5.

After reading Professor Seligman's detailed explanation of the orbital mechanics of the two planets around the sun, you may also want to go back and review the earlier post entitled "The chariot race in Ben-Hur and the motion of the planets." Then, as soon as the earth is turned away from the sun and towards the planet Mars in your part of the globe, go out and marvel at the nearby planet Mars!
Posted by David Warner Mathisen at 9:25 PM