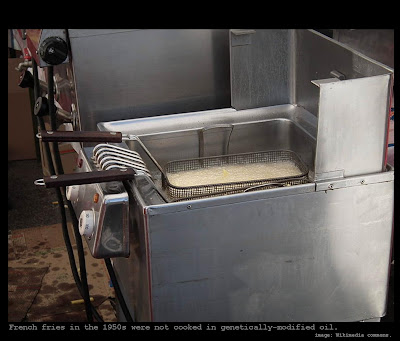 Bad analysis can lead to mistaken conclusions which lead to even worse mistakes in the future.

Back in July of last year, we looked at the possibility that the analysis done by Ancel Keys in the 1950s which drew a direct cause-and-effect line between the consumption of saturated fat and the incidence of coronary heart disease could be seriously flawed. Numerous subsequent analysts have pointed to major gaps in his methodology and reasoning.

In spite of these flaws, the connection between consumption of saturated fats (and dietary cholesterol) and heart disease remains so fixed in conventional wisdom that it is widely assumed to be "proven," and questioning it out loud will elicit nervous laughter as people try to figure out if you are really serious.

Rather than cooking in saturated fats (such as butter), we are advised to use polyunsaturated fats, such as those derived from canola, corn or soy. See for example the Dietary Guidelines for Americans (2010), which tells us to decrease our consumption of eggs and butter and to replace butter, tallow, or other saturated cooking fats with polyunsaturated fats "that promote heart health," such as canola and soybean oils (441, 91, 143).

We've already seen that some researchers believe that cooking with polyunsaturated oils may be extremely harmful to the human body, and that some studies appear to suggest that populations which switch from diets featuring traditional cooking in saturated fats to modern diets featuring foods commonly cooked in vegetable oils rapidly develop the familiar and deadly ailments plaguing western society, such as cardiovascular disease and diabetes.

Now, taking this potentially erroneous analysis to a new level, major corporations involved in the development of genetically-modified plant traits are actively working towards plants which will produce cooking oil "with a reduced fat profile" (as discussed on the website describing one such genetically-modified oil; other major GMO-producing companies are working on similar projects).

We have already discussed the evidence suggesting that serious further analysis should be done before reaching a conclusion that any genetically-modified foods are a good idea (and the possibility that, far from being a good idea, GM foods might actually lead to horrific problems, although again more analysis needs to be done before we can conclude that either). To rush out and create genetically-modified cooking oil based upon a potentially false hypothesis connecting dietary fat and cholesterol with heart disease seems to pile one set of insufficient analysis on top of another.

The dietary theories that we take as "settled science" and "proven beyond debate" turn out to be a very good parallel to other theories that have achieved a similar status of being "beyond question in polite company" but which may also rest on terribly flawed analysis. If you think that questioning the "lipid hypothesis" of Ancel Keys (and the US government's "dietary guidelines for Americans") creates uncomfortable reactions, try mentioning the possibility that the accepted Darwinian mechanism of evolution is flawed, or that the theoretical foundations of plate tectonics appear to be riddled with errors, or that ancient civilizations probably knew the size and shape of the ellipsoidal earth and crossed the oceans regularly.

To entertain such possibilities is as heretical in our generally close-minded society as it is to entertain the possibility that eating fat and cholesterol does not cause heart disease (and that it is thus possible that we should not be creating genetically-modified soybean plants to produce oils based upon that theory).

The comparison to the lipid hypothesis brings out another aspect of the other orthodox beliefs such as the belief in the Darwinian hypothesis or the belief that ancient mankind could not have possessed advanced scientific knowledge, and that is the fact that following flawed theories can actually be dangerous.

If the Darwinian theory is false, then the many conclusions about human behavior (and, yes, the human diet) that are based on Darwinian assumptions could be -- not just wrong -- but harmful.

Similarly, if the theory of steady advancing human progress is based on faulty analysis (and if an ancient civilization or civilizations existed with sophistication and scientific knowledge rivaling our own, followed by ages of relative ignorance), then remaining blind to the implications of that fact can also be very dangerous (as discussed briefly here and in more detail in the Mathisen Corollary book).

A skeptic might ask, if there was such an advanced lost civilization, what happened to them? It's actually a good question. Perhaps they started modifying the DNA of their crops in order to improve the "fat profile" of their cooking oil.