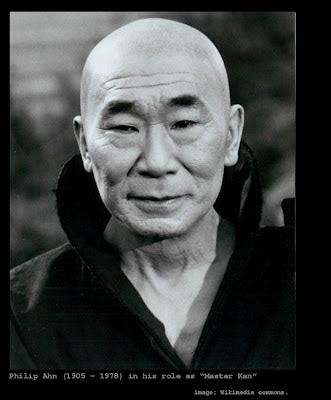 March 29 is the birthday of Philip Ahn (1905 - 1978), who portrayed Master Kan of the Shaolin Temple in the television series Kung Fu from 1972 - 1975. With kindliness and gentleness combined with dignity and firmness, he helped convey the philosophy of the legendary Chan Buddhist martial arts monastery to a wide audience, many of whom had never had much exposure to them before.

As the head of the temple, Master Kan utters the famous challenge to the young Kwai Chang -- one of the most well-known lines from the entire series: "When you can take the pebble from my hand, it will be time for you to leave" (which can be seen in the clip below beginning at the 7:10 mark).

In many of the flashbacks peppered throughout the series, Master Kan provides a change of perspective from the conventional by asking questions about seemingly unrelated subjects, and then providing the connection to the particular issue at hand. Often, as others have noticed, Master Kan's lessons appear to be closely related to teachings in the Tao Teh Ching, such as in the vignette below:

In the scene below, Master Kan teaches Kwai Chang (using the metaphor of a single untrustworthy nail discovered while building a house) that we cannot decide to trust no one just because we encounter one untrustworthy person:

We have remarked previously on the possibility that the Buddhist monastic tradition, as well as some of the wisdom contained in Taoism, appear to have clear connections to wisdom that was part of the ancient Egyptian culture. One explanation for this could be the hypothesis that a single unknown ancient civilization predated both China and Egypt and influenced them both (and probably ancient India as well). Another possibility is that early Egyptian influence proceeded east through India and ultimately to China -- or that it went the other direction from China to India and Egypt, or from India to both Egypt and China.

For example, there is a tradition that a monk, when ready to leave the temple and venture out into the world, had to pass through a hall of 108 mechanical "wooden men," each equipped with a potentially deadly attack that he would have to defeat (sometimes known as the "Hall of Wooden Men" or the "Wooden Man Labyrinth"). The connections to other important manifestations of 108, both in the Mediterranean and around the globe (including in the Americas) are explored in the Mathisen Corollary book.

In the scene below, Master Kan (silently) re-issues his famous challenge with the pebble, and this time Kwai Chang demonstrates that it is now time for him to leave. It is a poignant scene, and Master Kan imparts some final words of wisdom in farewell:

Philip Ahn was an essential pillar of quiet wisdom so important to the power and vitality of the Kung Fu television series that provided millions of viewers (including myself) with their first encounter with the Shaolin Temple.