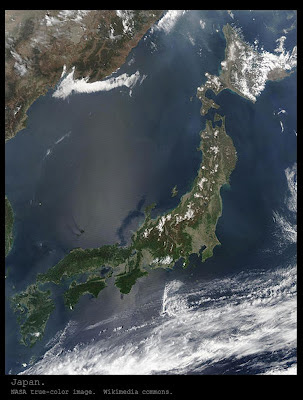 March 11 is the solemn anniversary of the deadly Tohoku-Oki earthquake and aftershocks, in which 20,000 human beings lost their lives.

It is an appropriate day to practice thoughts of compassion towards others, and especially towards those whose lives have been impacted by that catastrophe.

In a previous post, we saw that researchers have measured actual and significant changes in brain activity among monks who were asked to meditate on "unconditional loving-kindness and compassion." In this essay, the Dalai Lama (with whom the monks whose brainwaves were measured in that study were associated) wrote that compassion includes "genuine sympathy for others' suffering and the will to help remove their pain."

We can also hope that better understanding of what causes very powerful earthquakes can in the future lead to some improved prevention of suffering and loss of life.

One's fundamental geological theory will have a huge influence over one's explanation of what causes earthquakes. In this very important page of his book -- which he makes available free of charge to everybody online and which should be carefully considered by all those whose life's work involves the prediction and analysis of earthquakes -- Dr. Walt Brown compares the different theories regarding the mechanisms that cause earthquakes. In particular, he compares the mechanism proposed by the currently-accepted tectonic model and the mechanism proposed by the hydroplate theory.

There are many reasons why I believe that the hydroplate theory's explanation for earthquakes is superior to the tectonic theory's explanation. In numerous previous posts on this blog, we have examined evidence suggesting problems with the tectonic theory -- evidence which appears to strongly support the hydroplate theory (several links to previous posts discussing such evidence can be found in the final four paragraphs of this post).

In the bottom half of the web page previously linked from Dr. Brown's book, he has a very important section (in an inset text-box) entitled "What Causes Earthquakes, and How Can They Be Predicted?" He explains that during the flood event, rapidly escaping water removed vast amounts of material from the edges of what would become today's continents. Eventually, the removal of enough material (and the removal of enough weight) from the chamber floor directly below caused the section of the floor to bulge upward, in the area that today is the floor of the Atlantic Ocean.

On the other side of the earth, fractures and contraction (caused by melting and the contraction of magma due to the tremendous forces being generated that were pulling on the underside of the Pacific plate due to the upward pressure on the Atlantic side) weakened the support around the perimeter of the Pacific plate, resulting in a sudden and accelerating collapse of that plate, which sank inwards to create the Pacific basin and the Ring of Fire around its edges.

This event initiated the slide of the plates carrying today's continents away from the bulge in the center of the Atlantic and towards the basin that had opened up to form today's Pacific, as well as the eventual drainage of the floodwaters. It is also, according to the hydroplate theory, the root cause of today's earthquakes, which are primarily triggered by the force of gravity rather than by the convection-driven circulation of magma beneath "floating" plates (the mechanism that causes earthquakes according to the tectonic theory).

As Dr. Brown explains, today's faults were created during the events described above. Occasionally, rock along these faults will shift (different from the drifting proposed by the tectonic theory -- shifting is akin to heavy boxes in the back of a truck shifting to a position of lower potential energy), initiating the following sequence of events:

Frictional heat generated by slippage along a fault will increasingly melt, deep within the walls of the fault, mineral grains with the lowest melting temperatures. The solid rock encasing the liquid droplets is stretched by expanding droplets above the crossover depth and compressed by shrinking droplets below the crossover depth. As heating within a large volume of rock increases, more liquid droplets form, merge, and eventually escape along faults.39 The remaining solid rock collapses as an earthquake, while the slow drainage allows continental movement, as shown in Figure 91 on page 165. If piezoelectric40 minerals, such as quartz, are among those stressed, voltages can build up for hundreds of miles around what will become the impending earthquake’s point of origin (the focus).41 Such voltages and the resulting electromagnetic effects are known earthquake precursors. They are even detected in the ionosphere, about 40–600 miles above the solid earth.

The presence of electromagnetic events prior to and during severe earthquakes has been discussed in previous posts such as this one, which contains a link to a 1912 book quoting contemporary descriptions of unusual lightning during the powerful New Madrid earthquakes of 1811-1812 (in the United States).

Dr. Brown points out that electromagnetic signals were detected days prior to the Tohoku-Oki earthquake of 2011, as well as prior to the tragic 2010 Haiti earthquake in which 316,000 human beings lost their lives. However, due to lack of understanding of the importance of these signals, they did not lead to any preventive activity.

He notes that scientists are now beginning to realize that increases in electromagnetic activity, as well as increases in heat, can be measured prior to an earthquake and can be used to predict powerful earthquakes before they happen. However, because they generally hold the wrong fundamental assumptions regarding the mechanisms which cause earthquakes, scientists do not understand why these precursors take place. Both of these precursors can be satisfactorily explained under the hydroplate explanation of the cause of earthquakes.

Sadly, he notes that "an unwillingness to consider a global flood and a new scientific paradigm" will probably prove the greatest obstacle to the acceptance of a better understanding of earthquakes, and better measures to provide early warning that could save human lives and reduce suffering.

We extend our heartfelt condolences to those in Japan who are in mourning and grief on this one-year anniversary of the terrible earthquake, and our hope that people everywhere will continue to work towards the reduction and prevention of suffering and loss of life due to earthquakes.