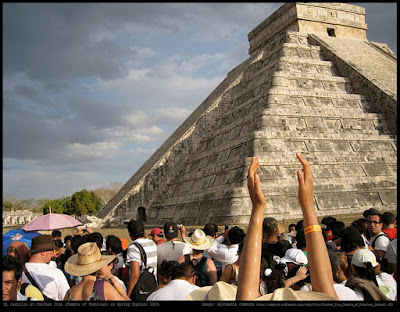 The March equinox is approaching and will arrive in less than 24 hours (23 hours from now, to be exact, or 0514 UTC on 20 March, which is 0014 Eastern in North America on 20 March, or 2214 Pacific on the 19th for those on the west coast), when the earth reaches the point in its orbit at which the plane of the ecliptic (formed by the plane within the circuit of earth's orbit) passes through the plane of the celestial equator (formed by the imaginary circle ninety degrees from the celestial pole).

For a diagram and some explanation of what causes the sun's path to cross above and below the celestial equator at the equinoxes, see the diagrams and discussion from this previous post written at our most recent winter solstice.

For a different diagram and a metaphor of the earth as an old-fashioned sailing ship whose bowsprit (the north pole) always points in the same direction as it circles the sun, see this previous post. Once you have checked out that "earth-ship metaphor," you will understand that the equinox is the point in our orbit at which the earth has the sun "at a broadside."

The equinoxes are thus extremely important stations of the year. From this point onwards, the days (which have been growing in length since the winter solstice) will grow longer than the nights in the northern hemisphere, until reaching the summer solstice when they will begin to grow shorter, although they will still be longer than the nights until the earth crosses through the fall equinox in September.

Technically speaking, the total hours and minutes of day are already longer than those of night prior to reaching the spring equinox, due to the fact that the refraction of light caused by earth's atmosphere enables us to see the sun before it actually crests the horizon. Also, as this helpful equinox article from National Geographic points out:

The importance of the equinoxes is enshrined in numerous ancient myths, some of which are discussed in the Mathisen Corollary book. The equinoxes are also celebrated in many ancient monuments, which retain their alignments to this day.

Many people know about the amazing serpent of light and shadow which descends the western balustrade of the northern staircase of El Castillo at Chichen Itza (also known as the Temple of Kukulcán) in the late afternoon of the two equinoxes (shown in the photo above). You can read much more about this important solar feature at this webpage from World-Mysteries.
Less well-known is the equinoctial sunrise alignment at the so-called Temple of the Seven Dolls at Dzibilchaltun, also on the Yucutan. A video shows the equinox sunrise phenomenon below, from the spring equinox of 2009.

A slightly shorter video shows the same phenomenon for the fall equinox at the same location, and due to the way the light rays were captured by the camera it creates an even more dramatic effect on the viewer.

Previously, we looked at the equinoctial alignments at Knowth in the Boyne River Valley in Ireland and at Mnajdra in Malta, and noted that the fact that these very precise alignments are still intact over four millenia after they were built causes some serious problems for the theory of continental drift.

Wherever you happen to be on the globe for the equinox, it remains an exciting and important station of the year.
Posted by David Warner Mathisen at 11:11 PM