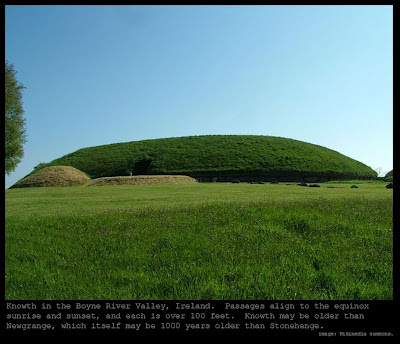 March 17, Saint Patrick's Day, is a major holiday in the United States, due to the important contributions of immigrants from Ireland and their descendents in the history of the country, which continue to this day.

One of the world's oldest and most important megalithic sites is found in Ireland, the Boyne River Valley. The River Boyne is apparently named for the goddess Boann, whose name means "Queen" or "Goddess." Note that the celestial aspects of the goddess known as the Queen of Heaven are discussed in this previous post.

The Boyne River is home to a number of large, ancient, megalithic passage mounds, including Newgrange, Knowth, and Dowth, as well as numerous smaller mounds and cairns. Although often referred to as "passage tombs," patient work by observers operating for the most part outside of the conventional academic community (largely during the late 1960s and the entire decade of the 1970s) demonstrated conclusive evidence that the passages in these mounds were deliberately aligned to important solar events, in particular the sunrise (and sometimes also the sunset) on the winter solstice, the summer solstice, the equinoxes, and the cross-quarter days. While they may have been used as tombs later on, it is quite possible that their original function was for heavenly observation.

One of those who drove the meticulous in-person research (often in adverse weather conditions involving early pre-dawn arrivals and long treks to cold and wet sites) that demonstrated the heavenly alignments of these ancient mounds is Martin Brennan, himself an American of Irish descent, as well as an artist (his detailed discussion of the spiral art found in the Boyne River sites in his books is extremely valuable and insightful). His book The Stars and the Stones: Ancient Art and Astronomy in Ireland should be one of the first stops for any analyst of these ancient sites.

Perhaps the most well-known of the Boyne River passage mounds is the mound at Newgrange, which features a cruciform passage over eighty feet in length, aligned to the winter solstice. Newgrange also contains a sophisticated "roof-box" above the entrance -- a narrow upper window 40 inches wide and 9 inches high, framed in stone, that enables a beam of light to penetrate all the way to the back stone of the end recess in the heart of the mound on the sunrise of the winter solstice. 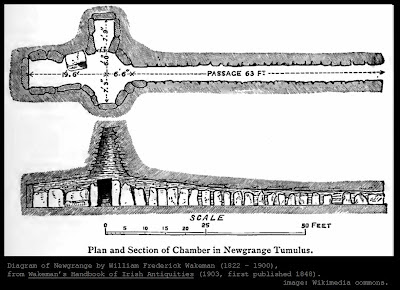 Newgrange also contains beautiful and complex "solar spiral" artwork carved into its stones, which Mr. Brennan shows to have had precise astronomical and solar significance (some incorporate distinctive vertical lines upon which standing stones would cast a shadow on important days). 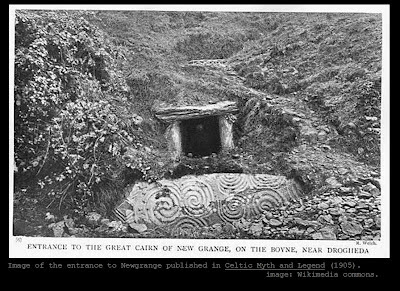 The beam of light entering the western passage at Knowth extends much further than the beam at Newgrange. According to radiocarbon dating Knowth was built about 500 years before Newgrange. The eastern passage, which cannot be observed because of obstructions, is about twice the size of the Newgrange passage. In the western passage the light beam extends nearly to the sillstone, beyond which the passage veers to the right. [. . .] Because of their length and the time of year they indicate, the passages at Knowth are unsurpassed for their astronomical potential in accurately defining a particular day. The full extension of the light beam entering Knowth West can be observed from the back recess of the passage. From there the appearance of the light beam would indicate equinox. Some archaeologists believe that this area of the passage once formed part of an earlier and smaller mound, although at present there is little evidence to support the idea. In any case, as it stands today, as a solar construct, the passage represents one of the great wonders of the Neolithic world. Stars and the Stones, 107.

As Mr. Brennan explains elsewhere in his book, a passage mound in which a precisely narrowed sunbeam strikes a rock deep within an interior chamber provides a much more accurate indication of an important solar station of the year than a gnomon or menhir casting a shadow.

Conventional historians admit that the mounds of the Boyne River Valley complex were probably constructed as early as 3200 BC. This means that they have stood for an astonishing 5,200 years or more, as of this writing.

When one considers the precision of the alignments of the roof-box at Newgrange and the hundred-plus-foot passages at Knowth, as well as the vertical lines in the carvings which align on significant dates with shadows cast by mighty stones (some of which have fallen over or been moved, but whose intended positions can be determined by surviving sockets), it seems amazing that no one has realized what a damaging blow this site deals to the accepted tenets of tectonic theory and "continental drift." Previous posts, such as this one and this one, have discussed this concept in conjunction with other ancient megalithic sites that retain their heavenly alignments as well (sites located at many points around the world, and not just on one continent).

The Mathisen Corollary book also discusses this telling evidence, how it calls the tectonic theory into question, and how the alternative theory proposed by Dr. Walt Brown -- the hydroplate theory -- not only clears up this geological mystery and many others, but sheds important light on other aspects of ancient civilization and mankind's ancient history.

The Mathisen Corollary book also examines evidence which suggests that the stone structures found in many parts of New England, while not as massive or magnificent as the largest mounds found in the Boyne River Valley, may be related to those of the Old World, and may have been built by members of the same culture, or by descendents of a culture that was influenced by those responsible for the megalithic structures of ancient Ireland.

This possibility, of course, is another that conventional academia refuses to accept. However, just as conventional academia for a century refused to accept the possibility that the passage mounds of the Boyne River Valley might represent sophisticated heavenly observatories, and just as they were eventually forced to grudgingly acknowledge the evidence that heavenly alignments were carefully built into these most ancient of structures, the evidence for ancient contact between the continents is extensive and will eventually be impossible to ignore or suppress.

Perhaps, it will then be possible to say that "immigrants" from the Emerald Isle played a significant role in the history of North America thousands of years earlier than most people suspect!
Posted by David Warner Mathisen at 7:23 PM