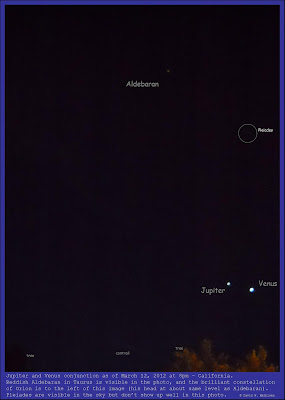 Tonight has to be one of the most spectacular nights for stargazing (and planetgazing!) in some while -- perhaps many years.

The much-anticipated conjunction of Jupiter and Venus is beginning. The two planets have been approaching each other fairly slowly for weeks, but now their approach is speeding up noticeably, and they are now extremely close -- see photograph above taken about an hour-and-a-half ago near the California coast in the "mid-thirty" north latitudes. Their exact conjunction takes place over the next twenty-four to thirty hours, but they may already look almost level in the sky, depending on your latitude.

In this previous post, we discussed this conjunction and noted that, if ancient myths are really inspired vessels for the transmission of a sophisticated understanding of celestial and planetary events, then we should be able to find ancient myths that describe the approach of these two planets in some kind of extended metaphor, and in fact we do find such metaphorical myths involving these two heavenly powers.

By going outside tonight, you can observe the same events and know that thousands of years ago observers saw in them the same mythological figures that you can imagine as you gaze at the heavens.

First, and unmistakeable in the west, are the enormous orbs of Jupiter and Venus, looking very yellow to the naked eye, with Jupiter a deeper yellow than Venus. To their right are the two brightest stars of the constellation Aries the Ram (in the head of the Ram), forming something of a letter "Y" lying on its side when viewed in conjunction with Jupiter and Venus (which form the stem of the "Y" or the head of an arrow or a dart if the two stars of Aries are the fletching of the arrow).

A good diagram of the view of these two amazing planets (and the location of those two stars in Aries) can be found in the third image down on "This Week's Sky at a Glance" (March 9th through 17th edition) from Sky & Telescope online. The first image in that same web page shows how rapidly Jupiter will separate from Venus as it continues towards the horizon over the next several nights.

With the moon now rising after midnight (on its way to the next new moon on March 22, in which it rises along with the [nearly] equinoctial sunrise), the entire panoply of stars is visible in the sky above and around the Venus-Jupiter conjunction (prior to the moon's rise, which tends to drown out some stars from view).

In the photograph above, reddish Aldebaran is visible almost directly up from Jupiter. It is unmistakeable among the other stars, located at about the same level as the head of Orion, which dominates the sky to the south at the time the above photo was taken. Orion is situated almost directly to the left of the view captured by the camera above for an observer in the mid-northern latitudes at that hour.

Aldebaran is in the constellation of Taurus the Bull, the brightest star of the "V-shaped" Hyades which are depicted in this previous post and this previous post. The diagrams in those posts, however, show Aldebaran and Taurus as they appeared when rising in the east shortly after dusk earlier in the year: because they have continued to rise earlier and earlier each day, they are now well across the sky after dusk, and the "V" of the Hyades is oriented almost exactly like the capital "V" on this page (for observers in the northern hemisphere at about 8pm when the photo above was taken). It is clearly visible in the night sky, even though it does not show up in the image above.

Similarly, the glowing cloud of the Pleiades is located almost directly up from Venus, and again it is clearly visible in the sky even though it is not very visible in the photograph (its location is circled in the picture, where you can detect a faint blur). The stars of the Pleiades are nicely visible through binoculars. They are shown and discussed in this previous post, but again that diagram depicts them on their way upwards from the eastern horizon, while they are now on their way downwards towards the west.

Many of the other important constellations discussed in previous posts can be seen tonight in all of their stunning majesty, including of course Orion (reaching his highest point on his daily arc at about 7:30 pm, and still quite dominant in the center of the sky when you look towards the south). Around him you can see all of the stars and constellations associated with the "Winter Circle." These include Sirius (and the entire constellation Canis Major is quite easily traced), Procyon in Canis Minor, the Twins of Gemini, and the important constellation of Auriga the Charioteer. Links to disussions describing how to find identify each of these celestial landmarks, and their importance in ancient myth, are contained in that previous post on the Winter Circle.

Not far away, it is also easy to spot the distinctive constellations of Perseus and Cassiopeia (diagrammed in the above-linked post discussing the Pleiades, as well as in this post about the August Perseid meteor shower).

In the east, Leo the Lion is enormous and extremely regal. The red planet Mars is every bit as unmistakeable in the eastern sky as Jupiter and Venus are in the west. Mars continues his apparent retrograde motion (it still has about a month to go) and has now proceeded to a point about a third of the way from Coxa (in the Lion's hip) to Regulus (his brightest star, representing one of his two forepaws). For more discussion of this apparent retrograde motion, see also this previous post.

There are actually many other brilliant constellations in the moonless pre-midnight sky right now, as well as an opportunity to spot Saturn (rising in the east around 9:45 pm) and Mercury (setting in the west behind the sun, but almost at his maximum elongation from the sun and therefore visible below Venus and Jupiter after sunset, to observers with a clear view of the western horizon).

It would be difficult to imagine a better set of circumstances for night-time appreciation of the glorious heavens! The next few nights should deliver much of the same -- I hope you have the opportunity to view the spectacle if your circumstances permit. 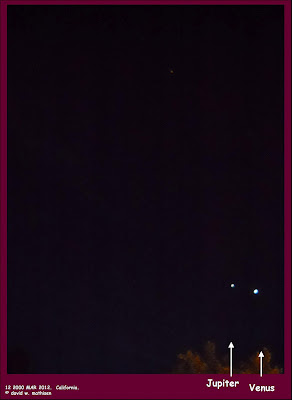