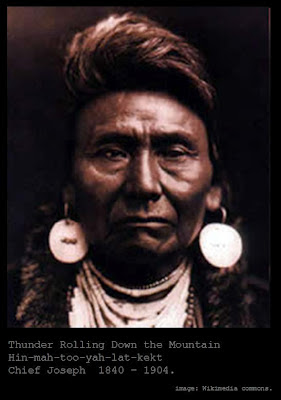 March 3 is the birthday of Chief Joseph, born this day in 1840. His name in his own language, Hin-mah-too-yah-lat-kekt (it is rendered and spelled slightly differently in different places), means "Thunder Rolling Down the Mountain." He was elected leader of the Wallowa (or Wal-lam-wat-kain) band of the Nez Perce in 1871, after the death of his father. In their own language, the Nez Perce are called the Nimíipuu, which means "The People."

The US government originally signed a treaty in 1855 acknowledging the right of the Nez Perce to an area of about 7.7 million acres, including the Wallowa Valley in northeast Oregon where Joseph was born. However, in 1863 the government proposed a new treaty which would reduce the Nez Perce territory to well under a million acres and exclude much of their traditional homeland, including the Wallowa Valley, which Joseph's father and many other Nez Perce leaders refused to sign.

In 1877, facing the forcible removal of his people from the Wallowa, Chief Joseph (along with other primary leaders including Toohoolhoolzote, Looking Glass, White Bird, and Joseph's younger brother Ollokot) led a group including between 200 and 250 warriors and numbering over 800 including women and children in search of a place where they could live in peace and freedom -- ultimately trying to reach Sitting Bull's people, who had fled across the Canadian border to Saskatchewan earlier that same year.

Pursued by much larger forces (numbering as many as 2,000 soldiers) under the overall command of General Howard of the US Army, Chief Joseph and his people traversed almost 1,200 miles, across the Rocky Mountains and several other ranges, from Oregon to northern Montana, fighting eighteen battles against superior numbers, until they were finally forced to surrender only forty miles from the Canadian border.

The dignity and eloquence of Chief Joseph's speech at the occasion of that surrender, as well as later trips to Washington DC to petition the federal government on behalf of his people, are justly famous.

Some selected passages of his words can be found at this web site. Passage IV, from a visit to the US capitol in 1879, reads in part:

There need be no trouble. Treat all men alike. Give them the same laws. Give them all an even chance to live and grow. All men were made by the same Great Spirit Chief. They are all brothers. The earth is the mother of all people, and all people should have equal rights upon it. You might as well expect all rivers to run backward as that any man who was born a free man should be contented penned up and denied liberty to go where he pleases. If you tie a horse to a stake, do you expect he will grow fat? If you pen an Indian up on a small spot of earth and compel him to stay there, he will not be contented nor will he grow and prosper. I have asked some of the Great White Chiefs where they get their authority to say to the Indian that he shall stay in one place, while he sees white men going where they please. They cannot tell me.

Let me be a free man, free to travel, free to stop, free to work, free to trade where I choose, free to choose my own teachers, free to follow the religion of my fathers, free to talk, think and act for myself -- and I will obey every law or submit to the penalty.

Whenever the white man treats the Indian as they treat each other then we shall have no more wars. We shall be all alike -- brothers of one father and mother, with one sky above us and one country around us and one government for all. Then the Great Spirit Chief who rules above will smile upon this land and send rain to wash out the bloody spots made by brothers' hands upon the face of the earth. For this time the Indian race is waiting and praying. I hope no more groans of wounded men and women will ever go to the ear of the Great Spirit Chief above, and that all people may be one people.

When Chief Joseph surrendered in 1877, it was found that he carried a small tablet in a pouch bearing an inscription in the cuneiform writing system of ancient Sumer, Babylon, and Assyria. The tablet measured just over an inch square, and he said that it had been handed down in his family for many generations and that it had been given to his ancestors. Modern scholars have translated it and it appears to bear a record of an ancient transaction involving the sale of a lamb. This writeup appeared in the Smithsonian Magazine in February, 1979 (Smithsonian 9:36) describing the inscription. Scholars attest that the date in the inscription places it prior to 2000 BC.

Since being discovered to bear cuneiform writing, the tablet has been the subject of speculative attempts to explain away the obvious problems that it poses for the conventional historical narrative (when it is discussed at all -- in general, scholars appear to have ignored this stunning and important piece of historical evidence). Although there is not a shred of evidence to support these assertions, writers declare that it must have been given to Chief Joseph or his father by missionaries. This is disgraceful, as to make this assertion is to call him a liar. It is also ridiculous, as there is no explanation as to how a nineteenth-century missionary would be carrying around an ancient cuneiform tablet or why this imaginary missionary would decide to give it to Chief Joseph of his parents, let alone why Chief Joseph would choose to lie about it.

Other speculations, such as the idea that the son of the US Army officer who had served under General Howard in the Nez Perce War and who donated the item to the West Point museum got his story mixed up or lied about it as well, are equally baseless. These are the sorts of disgraceful speculations that replace serious analysis of evidence about human history when other vested interests are threatened by the facts.

Ultimately, as I have repeated many times in this blog as well as in my book, any one piece of evidence on its own is not as important as the larger body of evidence of which that single item is but one representative member. The cuneiform tablet of Chief Joseph, were it the only item suggesting that ancient history is quite different from what we are taught, would not prove that we should re-evaluate the orthodox view. However, it is one of thousands of other pieces of very solid evidence (some of which are discussed in other posts listed here).

Setting aside the question of his treasured cuneiform tablet, it is appropriate to honor the spirit of Thunder Rolling Down the Mountain on this 172nd anniversary of his birth.

Even suffering first-hand the outrages that were inflicted upon himself and his people, he did not sink to categorizing other individuals by their membership in an ethnic group (he did not become a racist against "whites," even after his people were disgracefully and shamefully treated by them), saying: "We were troubled with white men crowding over the line. Some of them were good men, and we lived on peaceful terms with them, but they were not all good."

Even after all the indignities he and his people suffered, he was able to say, "All men were made by the same Great Spirit Chief. They are all brothers. The earth is the mother of all people, and all people should have equal rights upon it."

Posted by David Warner Mathisen at 6:07 AM